Klondike, CPAC Headquarters – As of today, multi-logging seems to be more evident then ever. But the big question is, why is it so evident nowadays? Today we will be looking into the most popular cases of multi-logging of the past six months.

As the first part of the year comes to an end, it seems as if, like steroids in the MLB, multilogging has been running rampant. Let’s look into the accusations that have shook through the army community.

1. The Case of the Army Republic

On January 9th, 2014, a post was made by Shaboomboom about how the Army Republic, particularly 122344a, Burritodaily and Vinny (who all happen to be CPA legends) were multilogging. Starting with 122344a, he had the ownership of two penguins, his own (122344a) and Elitesof. They had both been seen at events together, including his own retirement event.

In Burritodaily’s case, like 122344a, had the ownership of two penguins, Gannon and Clevels, which had also been seen at numerous events together.

The first case of a possibility of Ganger90 multilogging was shown in a picture taken in January 2013, where it showed Ganger having three browsers open at an event (Firefox, Chrome and Opera). 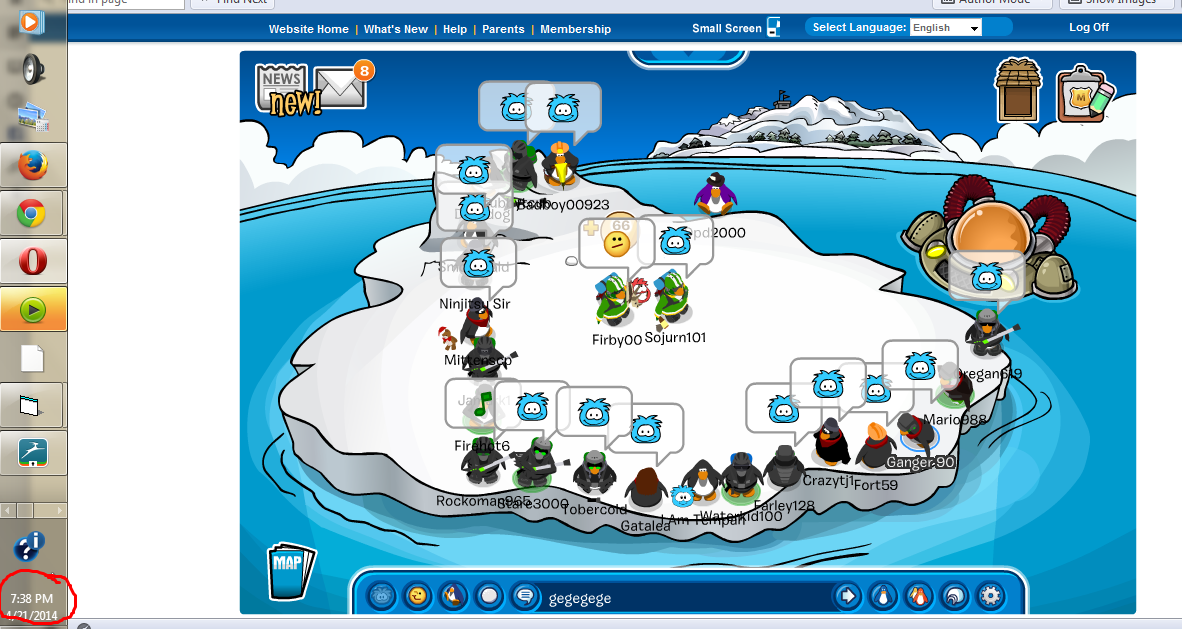 3. The Case of the Army of Club Penguin 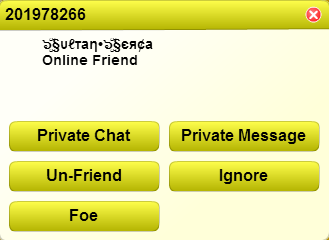 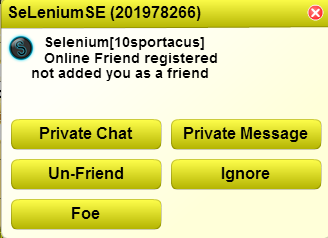 After that, many pictures were released by Skyfish of high ranking ACP soldiers (Jerry, ACP Leader at the time, and Lumarnara, ACP 3ic at the time) telling Skyfish about multilogging. 4. The Case of the Light Troops

Like the Army of Club Penguin, there have been many accusations of the Light Troops multilogging. The most recent case has been in the current war between the Light Troops and the League of Justice. There were multiple pictures of Light Troops Creator and current Light Troops Leader, Ioioluk, as well as other leaders, eachother to multilog (these pictures are currently being disputed for if they are legitimate or not) 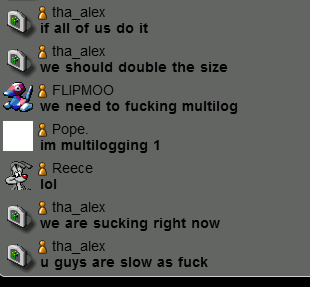 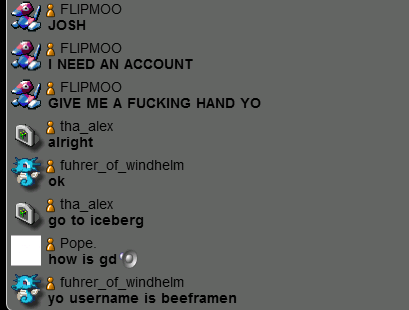 A Light Troops 2ic, Tylund1, is also being accused of multilogging, after being allegedly seen on the penguin “Small Hotdog”, a penguin who is seen at many events, however is not on the ranks page. 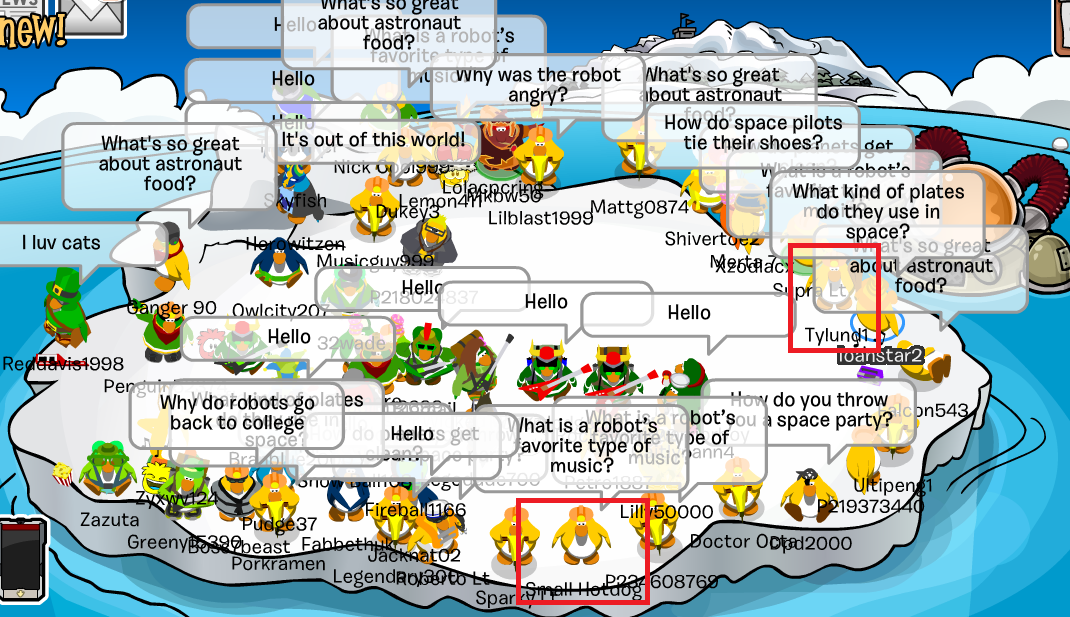 One of the other cases was in January 2013, where Elmikey (RPF Leader at the time) told a troop called “zoozoo” to log onto two browsers for an event. 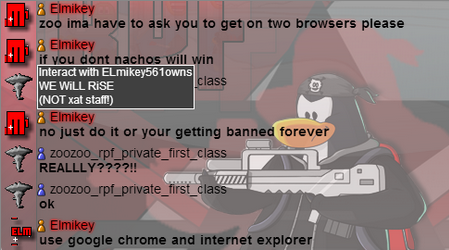 However, these claims were proven not true after the troop “zoozoo” was revealed to actually be Beeky, Nacho Leader, and that the picture was fake.

Another case was with Taco, Former SWAT Leader. A picture was released of Taco telling a SWAT Leader in Training, Oliver, to multilog. 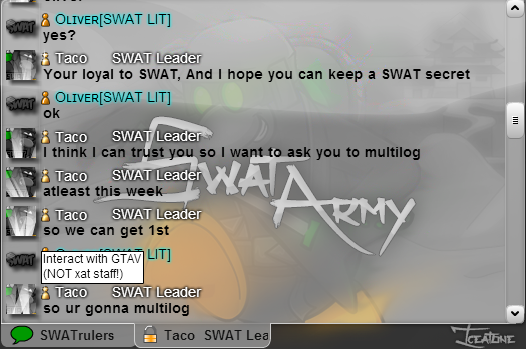 One of the more current accusations of multilogging is aimed towards Danny, Former Nacho Leader and current RPF Leader. He has been accused of multilogging on the account “Jackmandang”, who has been seen at several RPF events with Danny. Shown in an RPF Promotion Post in 2010, was the name Danny/Jackmandang. The picture is shown here: 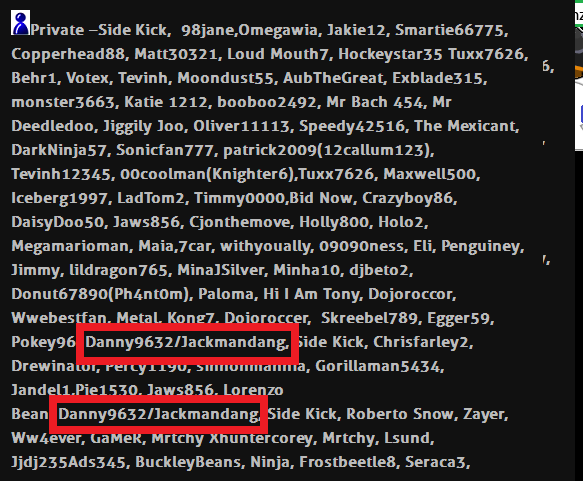 I managed to catch an interview with Mrtchy, ACP 2ic and Tempah, Golden Troops Leader, about the issue.

Mrtchy: I think it shouldn’t be done, but it will be done no matter what. There’s no punishment for it right now, so there’s nothing really stopping people from doing it

CPAC: Do you think “no multilogging” should be a rule? If so, what should the punishment be?

Mrtchy: I think it should be implemented, but it’s hard to come up with a viable punishment.

CPAC: Tempah, what is your opinion on multilogging?

Tempah: I think it’s wrong and shouldn’t happen, but with so many people doing it and many more undetected people will think they need to multilog to compete.

CPAC: Do you think no multilogging should be a rule? If so, what should the punishment be?

Tempah: Yeah, it should for sure, otherwise army sizes won’t actually reflect how big they are, but rather how many browsers they have. For the punishment, I’m not sure. I think it should be dealt with on a case by case basis.

I think that multilogging is definitely something that shouldn’t happen in armies, but lots of people do it. I honestly don’t blame them, nothing is implemented to stop them from multilogging. In regards to my earlier comment about MLB and steroids, they have rules in place for whoever does use steroids and other performance enhancing drugs, which stops most people from doing it *cough* A-Rod *cough*. With rules set in place, I do think multilogging would not be as used, but it would still be an issue, no matter what.

What is your opinion on multilogging? What punishments do you think should be in place for those who do multilog? We want your opinion!